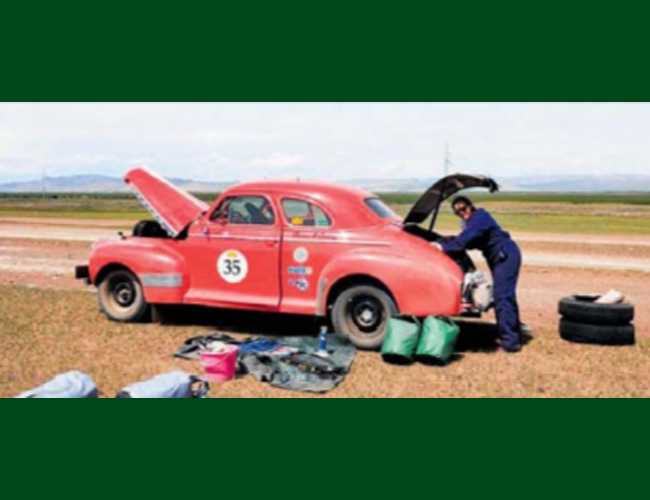 Image: Lockhart with the 1941 Chevrolet Super Deluxe Coupe she drove with husband Andrew Barnes in the 2019 Peking to Paris Rally to raise funds for the Sir Graeme Dingle Foundation.

Facing stage 4 breast cancer, Charlotte Lockhart talks to Joanna Wane about New Zealand’s underfunded medicine crisis and why we should switch to a four-day working week

Bugger! So long story short, on January 26 I was told that the swelling in my shoulder is malignant and subsequently, I now know I have advanced breast cancer, stage 4.

Charlotte’s Cancer Journey Blog (Facebook post, February 28, 2021) Charlotte Lockhart doesn’t dwell on “what ifs”. Right now, she doesn’t have the time or the energy to waste on it. But still . what if she’d been given an ultrasound scan when she asked for one last October while she was sitting out MIQ in Auckland, experiencing debilitating pain in her shoulder? What if, six months earlier, a lump in her neck had raised serious alarm bells, instead of initially being diagnosed as scar tissue from radiotherapy treatment during her first brush with breast cancer in 2004?

But then . what if researchers hadn’t made a breakthrough with Ibrance, a new class of targeted therapy for Lockhart’s particular type of metastatic breast cancer? And what if, after years of intense lobbying, Pharmac had decided against funding the drug, leaving patients to keep stumping up for it themselves at a cost of $6000 a month? In some ways, at least, Lockhart is one of the lucky ones.

After years of being cancer-free, that second diagnosis was a brutal blow; her first shoulder scan “lit up like a Christmas tree”. Reassuringly, the cofounder and CEO of the not-for-profit 4 Day Week Global initiative has responded well to treatment.

Yes is my middle name.” Ibrance, which has been subsidised by Pharmac, the Government’s drug-buying agency, since April last year, has been truly life-changing for Lockhart, who’s 54. Without it, her life expectancy might be as little as two years.

“Now, if I live another five years [on Ibrance], medical advances in cancer therapy will be better again and that will probably buy me another five years,” she says. “In 10 years’ time, I’d be surprised if they haven’t found a cure for this. Whether that will come in time for me or not, that’s going to mean we have fewer of our people even starting on this journey.” Lockhart has private health insurance – “My advice to readers out there is that if you can humanly afford it, or your place of employment offers it, take it with both hands” – and is in a position to cover extra medical costs that for many would simply be out of reach.

Whether New Zealand’s drug-buying model remains fit for purpose has been the subject of heated and often emotive debate since Pharmac was founded in the early 90s, largely due to the eyewatering cost of new-generation therapies. A 2019 International Comparisons of Modern Medicines report ranked New Zealand last among OECD countries for both access to funded medicine and pharmaceutical investment overall.