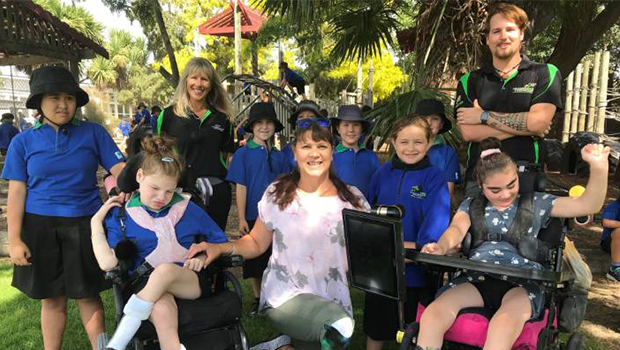 A Blenheim amputee and special needs teacher is taking to the skies next week to show her kids disability is no obstacle.

Marlborough woman Carla Taylor is one of 26 people who will jump out of a plane next Saturday at Abel Tasman skydive in Motueka, to raise money for the Graeme Dingle Foundation.

Since having her leg amputated nearly five years ago, and working with special needs children, Taylor wanted to use the skydive to model courage and resilience.

Although nervous and trying not to think about the jump too much, Taylor was used to looking for the positives.

Taylor was born with a congenital deformity in her right foot and ankle and had her leg amputated nearly five years ago.

“You’ve definitely got to persevere and have resilience to get through those difficult days, but we all have them,” she said.

Knowing first-hand what it’s like to grow up with a disability, Taylor said she was able to empathise with the children she worked with.

All money raised by Drop For Youth will go towards the Graeme Dingle Foundation, which runs youth programmes such as Kiwi Can to teach kids resilience and life skills.

Having seen the impact of the Kiwi Can programme for her students and her daughter Cobi, Year 4 at Whitney Street school, Taylor was eager to support the foundation.

“It’s just an amazing group of people doing an amazing job of teaching children the morals that they need for life outside of school.”

“I just wanted to do anything I could to help them out, and I get a parachute jump out of it.”

Marlborough Girls College principal Mary-Jeanne Lynch would also be taking the plunge next week, and admitted the challenge was terrifying.

“I don’t see that there’s any sense in stepping out of a plane that’s flying perfectly through the air – it would be fair to say that I’m quite terrified of this.

“But as I said to the girls in assembly yesterday … to learn and to grow you’ve got to step out of your comfort zone. It’s also an incredibly good cause, we’re working with the Graeme Dingle Foundation.”

He said about 3000 Marlborough kids would be involved in programmes through the foundation this year.

“We’re almost at 60 per cent of Marlborough kids which is pretty cool, no other region comes close to that,” he said.

“That’s why we need the community support and it’s really exciting to have a really varied group of people from business people, to community groups right down to teachers and students and community people to support us.”

Support for the foundation could be made by sponsoring the skydive participants, with the Givealittle page already raising more than $46,000 a week out from the skydive.