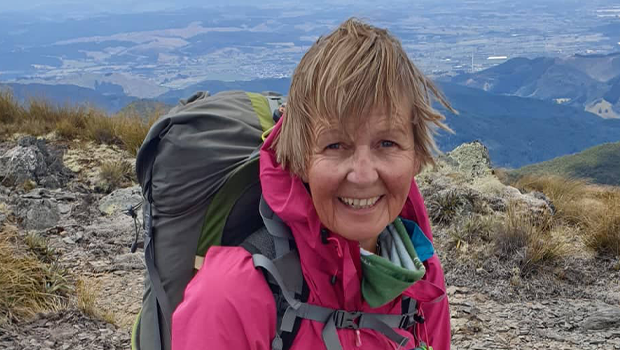 Long-distance walker Marian Campbell is defying the pain barrier as she walks the length of New Zealand to inspire young people to find a pathway in life.

As a staunch supporter of the Graeme Dingle Foundation‘s aims to help build self-esteem in youngsters, and also as a leader for the Duke of Edinburgh Award scheme, Campbell is walking the entire Te Araroa trail to send a message to youth and inspire others to expand their minds by discovering New Zealand’s unique outdoors.

However, she is having to show courage to overcome the physical challenges of walking the continuous 3000-kilometre track from Cape Reinga to Bluff.

The retired high school teacher from Waipukurau started her journey in September from Cape Reinga and was moving down the South Island.

Ninety Mile Beach was not kind to her and she damaged her feet considerably, which then resulted in a knee injury.

She was unable to walk so was forced to take a break for four weeks.

Marian also copped a dinnerplate-sized bruise on her thigh but, true to her ethic of taking every chance to raise funds for the benefit of young people, she was using the injury as a sponsorship opportunity.

She wrote on Facebook: “For those of you who are keen to sponsor the bruise – here is an updated picture. The bruise graced my presence on the 7 January 2020 – 6 days in and it appears it has invited friends to hang out due to the size it is now.

“Sponsoring $1 per day for the life of the bruise will make a huge difference to a child’s life through the generosity of the Graeme Dingle Foundation. I can’t tell you all enough how much your support means to me.”

Her daughter-in-law Haylee Wrenn contacted the Graeme Dingle Foundation to say how inspirational Marian is.

“When Marian was little she contracted hydatids, which made her chronically unwell. She was told that she would not be able to walk very far after she lost part of her lung due to this disease.

“She is on a personal journey to prove that it does not matter what challenges you have faced in the past, you can overcome them with the right mental spirit.

“This is why she has chosen to support the Graeme Dingle Foundation as their values and beliefs align nicely especially around the focus on children.

“Marian has huge determination as she is constantly thinking of her father – he was a prisoner of war and walked in the death march [a gruelling 100-day march across Poland in the winter, starving and freezing cold].

“Her message to me this morning was that she may not have the lung capacity she needs and injuries like her current bruise cause considerable pain, however, her father did not have food and had frostbite on his toes so if he could survive the death march then she can keep going as well.”

Marian Campbell is walking the entire Te Araroa Trail to raise money for the Graeme Dingle Foundation, including calling for sponsorship of a bruise (right) she got on one part of the trail.