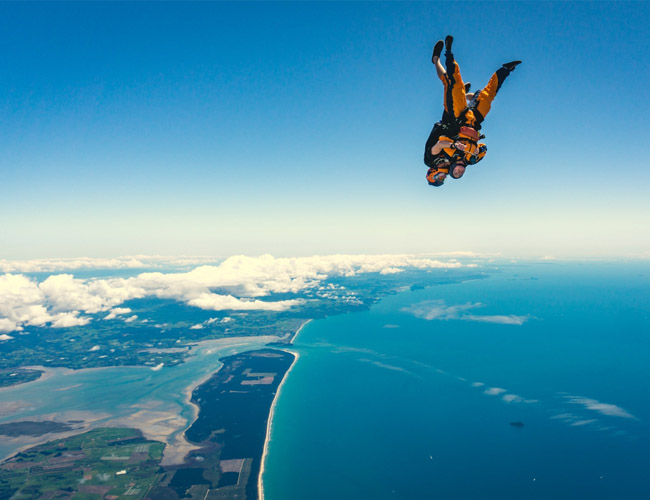 Alan was one of 19 people who took part in a Drop Your Boss challenge to raise funds for the Graeme Dingle Foundation’s Western Bay of Plenty region.

“It really was a fantastic experience and something that I wouldn’t have contemplated previously,” he says.

Alan was lucky, striking a sunny, blue sky day for his jump with Skydive Tauranga.

“So we got up to 12,000 ft and you could look across and could see Mt Taranaki and Mt Ruapehu and Rotorua Lakes.” He was the second of the two jumpers on the flight.

“You are giving all your trust into someone else, you have to be able to do that.

“Once we were going you are sort of upside down for a little bit, turning, then you come upright and from then on it was such an awesome experience, almost over too quickly.” After a 40 second freefall, the parachute was opened and Alan says he can’t really recall how long it was before getting to the ground.

“From my perspective I’d recommend it for people, even if they are a bit nervous about it and it’s something they haven’t considered before because it’s one of those moments in life that you’ll never forget. For me it was just awesome to be able to do that on behalf of the cause and to know we were doing it for a particular purpose – it was just outstanding.” Alan’s fundraising total is currently sitting just over $500 but there is still time for people to donate.

EastPack are matching dollar for dollar the amounts raised by their staff.

The Graeme Dingle Foundation Western Bay of Plenty runs Project K, Kiwi Can, Career Navigator and Stars, reaching over 3700 young people in the local community. These are all successful school-based programmes that aim to inspire young people to reach their full potential by helping to build their self-esteem, promote good values and teach valuable life, education and health skills.