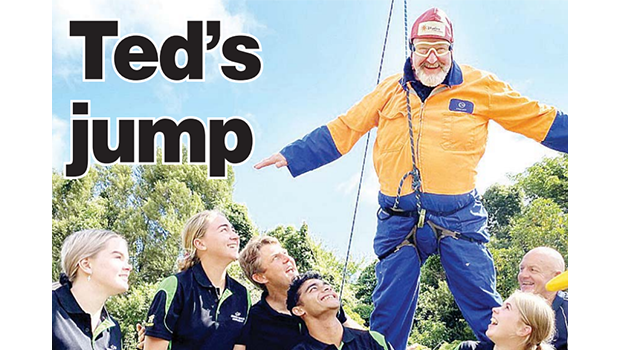 Sanfords general manager of aquaculture, Ted Culley, is no stranger to heights and certainly isn’t afraid to put his body on the line for a good cause.

Ted is one of 26 people who have signed up to jump out of a plane for the Graeme Dingle Foundation‘s Drop for Youth Marlborough fundraiser set for February 22. While the other ‘daring troopers’ are jumping 9000ft, Ted is taking it a giant step further by jumping at 20,000ft.

After many conversations with contacts throughout New Zealand and overseas, he’s managed to exceed $24,000 in donations and has also lost 18kg.

“Plus I’ve had 87 sponsors. that’s a lot of conversations. Some of the sponsors hadn’t heard about the Foundation but they know how crazy I am so they feel obligated to put money in,” he laughs.

Ted’s connection to the Graeme Dingle Foundation goes back a number of years when Sanfords first got involved back in 2002.

Ted was invited to join in with some kids during a Kiwi Can lesson and since then, he admits he was “converted to the cause”.

“The feedback from the Kiwi Can programme has highlighted how it’s improved young people‘s behaviour and respect and generally encouraging children to do the right thing.

When you are an employer that’s what you are looking for in staff; someone that thinks of other people and are not just out for themselves.

“Marlborough was one of the last areas that got into it but the area manager, Kelvin Watt, has done an extremely good job of getting the coverage here and signing up local schools to the programme,” he says.

The idea to skydive and fundraise came when the ‘Drop Your Boss’ was introduced, where Ted took part in the first year and raised $14,000.

When at a presentation for Project K, a 14 month long programme designed by the Foundation for teenagers, one of the prizes a student received was a parachute jump.

Aside from jumping and fundraising Ted has also sponsored children from Havelock School to skydive as part of a letter writing project where they explain how the Kiwi Can programme had impacted on them.

“Last year a daughter of one of the guys working for me in the factory got to do it; she got a big buzz out of that,” he says.

With the day of the jump nearing, Ted is asked how he’s feeling ahead of his 20,000ft drop.

“From my experience the hardest bit is getting off the seat and going to the plane’s door to jump. it’s the hardest metre I’ve moved in my life,” he jokes. “Nobody can hear you screaming as you free fall apart from the guy on your back.

“It’s not for everyone; people can either do it or they’re horrified by the idea. It’s a bit like seafood. you either love it or hate it. It’s a similar disposition,” he says.

Anyone wanting to support Drop for Youth Marlborough, Ted invites you to visit the Givealittle page and support the other participants who are currently fundraising.

The goal is for each person to raise $1000 in order to enable them to jump. “Please go online and support these people,” Ted says. “They have put themselves out there to fundraise for a fantastic cause.” Visit https://givealittle.co.nz/event/ dyf-marlborough.

There are 26 local people including teachers, a journalist, a funeral director, people from the viticulture and aquaculture industries and others from the community, who are jumping out of a plane next month in the name of charity. They just need your support to reach their fundraising goals. Photo provided.