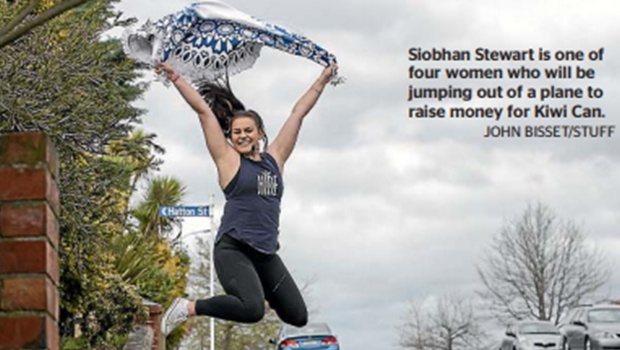 Three acrophobic women and one other who “may freak out” are willing to conquer their fear of heights by skydiving for a national charity.

The Timaru quartet have been sponsored for the Drop For Youth Kiwi Can fundraiser that will see them tandem jump from 4000 metres over Ashburton Airport, weather permitting, on Saturday.

Kiwi Can is a life skills and values programme, under the Graeme Dingle Foundation umbrella, which builds confidence and teaches leadership.

One of the four taking part in the jump, business owner Michelle Shaw, has an extreme fear of heights and doesn’t particularly like flying but thought the foundation was a worthy cause for her to try to overcome her dread.

“The Graeme Dingle Foundation does an awesome job supporting kids, building confidence, overcoming obstacles and making goals. It’s a tough world out there, the more help given to younger people the better.”

Timaru South School teacher Keri Brown and practice nurse Linda Merilees were also terrified of being up high but were taking the plunge as well.

Skydiving had been on Brown’s bucket list despite her phobia. She said her school had been very supportive with fundraising.

Merilees was trying not to focus on the jump and seemed to be looking forward to it being over.

Highfield School teacher Siobhan Stewart had bungy jumped but hadn’t spent time thinking about her impending skydive. “I’ll probably get there and freak out,” she said.

All four women will have parachute training before their jump and must raise a minimum of $1000. So far they have been sponsored a total of $7000.

Kiwi Can spokeswoman Karla Guerin said skydiving was chosen for the fundraiser to show students that doing something out of their comfort zone was a challenge.