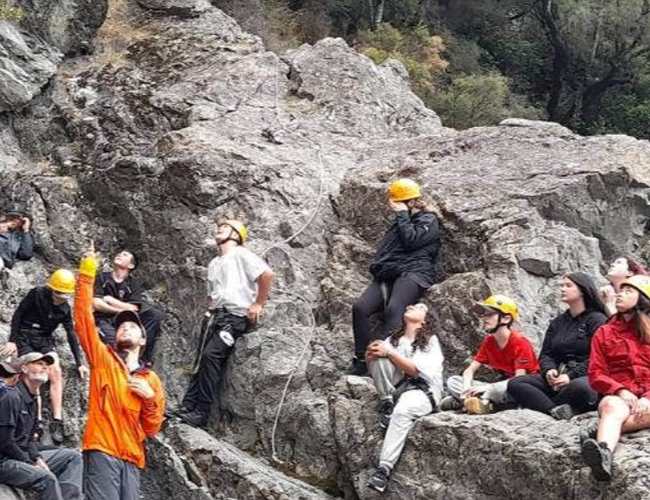 Exhausted but elated, a group of Christchurch teenagers have returned to school after a 20-day expedition through the Southern Alps.

The 12 students from Hornby High School hiked and biked 200 kilometres, carrying their gear including tents, clothing and food for up to four days at a time.

They had to contend with cold weather and strong winds – and not having cell phones – and although many had never experienced living in the outdoors, everyone rose to the challenge.

The intrepid group cycled back to school on Wednesday morning and were greeted by hundreds of fellow students who lined the playground to cheer them on.

There were hugs and even a few tears as the young people met their parents for the first time in more than two weeks.

Among the adventurers was 14-year-old Isaac Whear​, who signed up to “get out into the outdoors and try new things”.

“We went up Mt Oxford on an overnight tramp but we ended up getting stuck on it because of the wind, it was blowing everyone over,” he said.

“It was more like a survival type of thing. People were pretty stressed out for getting to the shelter but after everyone got into a safe spot they relaxed.”

It was a “great experience”, especially the rock climbing and abseiling, he said.

“I learned how to work as a team, how to survive and do hikes with heavy packs on.”

Nikki Christiansen was there to meet her nephew Alazae Rauhihi-August​. She said it was a good chance for the kids to get away and experience new things.