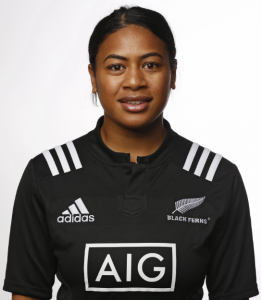 Check out this story on amazing Kiwi Can Leader Langi Veainu who is an impressive sportswomen looking to secure the Black Fern jersey.

Warriors league star Langi Veainu is on the cusp of becoming a dual international as a Black Fern. As the Farah Palmer Cup rugby season gets underway, she tells of the mental battle she’s won to get this far.

Making sports history last year with the Warriors in the inaugural NRL women’s premiership was a career high point for Langi Veainu.

Appreciating the significance of the occasion as a first, and playing in front of her large family as a professional athlete, is a moment the 25-year old winger will always cherish.

“To be a part of the Warriors’ history is humbling. Having my family there to support and watch me run out on the field was everything,” says Veainu, who has a six-year-old daughter she calls her “main motivation”.

After a solid NRLW campaign, Veainu was rewarded with re-selection into the Kiwi Ferns – another career highlight, and a welcomed one, after experiencing her lowest point the season before.

Veainu made her Kiwi Ferns debut at the NRL Nines in 2016, but didn’t make the New Zealand squad for the 2017 Rugby League World Cup.

“To be honest, that was really hard,” she says. “I went through depression, because I didn’t know how to manage the rejection. It was my first time being dropped.”

Now, she says, it was the best thing to have happened to her.

Veainu credits her partner, Looch, and her dad, Tuakifalelei, with helping get her through the rough period, and then back into sport after a two-month break. The advice they both gave her at the time allowed Veainu to reflect and take ownership of her actions.

“Dad said it was a lesson from God because I wasn’t grounded enough. And he was right,” she says.

“My partner kept saying I could manage the situation two ways: do nothing about it or get back up and work harder.”

She chose the latter.

“At the time it obviously sucked, and I would cry most days. But, if I’m honest with myself, I wasn’t appreciating the honour of putting on the black jersey and representing New Zealand. I’m a better person for it.”

She’s now hoping to be part of more sporting history. Veainu has switched one black jersey in pursuit of another, after successfully trialling for the Black Ferns.

In a way, the powerful Tongan wing is returning to her original sporting love.

“Growing up in Christchurch I only played rugby and touch; I’d never really heard of rugby league,” she admits.

Veainu moved to Auckland with her family after Christchurch’s devastating earthquake in 2011, and friends asked her to fill in for their rugby league team.

“That’s how it all started. I would play rugby on Saturdays and league on Sundays,” says Veainu.

Having played both codes at a professional level, Veainu says she has no preference – she just loves playing sport.

For now, she wants to concentrate on getting the little things right, enjoying the moments and working towards a Black Ferns debut – and ideally a spot in the 2021 Rugby World Cup team.

“That’s a long-term goal. but just being in the Black Ferns environment is an achievement and it’s super crazy. I buzz out every time I think about it because I’m training with players like Kendra [Cocksedge],” she says.

“Everything has gone by so fast since I was approached by the coaches at Counties Manukau training. I’m blessed to be here so I’m just taking it all in.”

Veainu is about to start her fifth season with the Counties Manukau Heat in the Farah Palmer Cup, which gets underway this weekend. The Heat are determined to go one better than last year, when they lost the grand final to Canterbury (Veainu scored an intercept try in the 13-7 loss).

After attending two camps and a trial game earlier this year, Veainu secured a contract with NZ Rugby, and made the first New Zealand Barbarians team to play against the Black Ferns.

“It was a privilege to play in that team. The girls have been good at sharing advice and reminding me to keep taking small steps towards my main goal,” says Veainu.

When she’s not lighting up the field, the mother of one is working to deliver the Graeme Dingle Foundation’s ‘Kiwi Can’ programme.

The initiative works with primary to intermediate school children, teaching values like respect, integrity and resilience.

“I learn so much from the programme and the kids,” Veainu says. “Although the work is dependent on funding, seeing them smile makes it worthwhile.”

The values go beyond the classroom, with Veainu and her partner applying the same teachings to their daughter, Laukuonga.

“My daughter’s name means Rock of Ages. My dad gave her a biblical name which means eternity rock; whatever concerns we have, she’ll always stand firm. And she’s lived up to her name,” Veainu says.

“She has been my rock through everything. She teaches me the little things in life, like gratitude and patience, even though she doesn’t know it.”

Laukuonga – or ‘Kwonka’ as her family affectionately know her – also attends trainings and watches Veainu and her team-mates put in the hard yards.

“It teaches her about work ethic and shows her the realities of life – sometimes we don’t always get what we want, but it’s how we handle it that matters. She will always be my main motivation, along with my family, for continuing to play sport,” says Veainu.

Coming from a family of six brothers and four sisters, there is no shortage of support and advice.

Her older brother, Telusa Veainu, played for the Highlanders, Crusaders, and Rebels in Super Rugby before going to play for Leicester in the English Premiership.

There’s healthy sibling banter between the two. But, as the only girl in her family to pursue sport as a career, Veainu wants to be open about her own experiences – the good and the bad – knowing it’s not always an easy path to choose, especially for women.

“I want to be real so people know, especially young girls, that sport, like life, has its ups and down,” she says.

“When I was going through depression it crushed me. But I have good support, so I managed to get on top of it. Imagine those girls who don’t? If speaking about it means it helps one person then that’s good.”

So, what advice does she have for those who may want to venture down a sporting pathway?

Give it your all, she says. Appreciate the little things and, more importantly, have fun. Remember why you want to achieve your goals, be yourself and enjoy your sport.

As the domestic rugby season gets underway, her own advice guides her towards the next goal – aiming to make more sporting history, in a different black jersey.