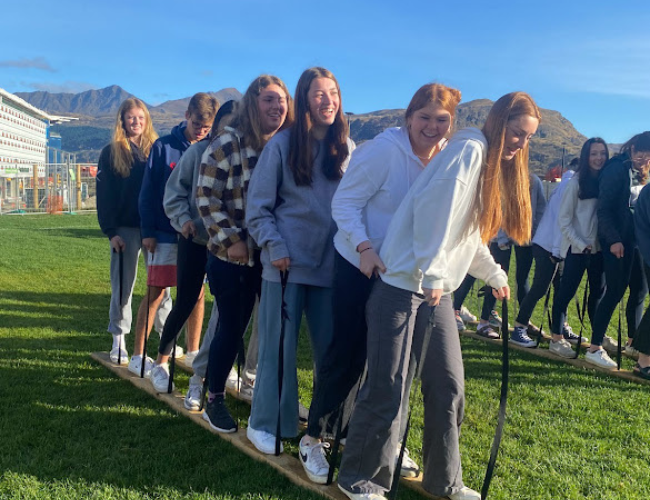 As we are now well over halfway through the 2022 school year, we checked in with some of Wakatipu High School’s Stars mentors to find out how the programme is going.

Stars wouldn’t be possible without the generous support of Year 12 and Year 13 students who make a commitment to serve as mentors to all Year 9 students, walking alongside them for the duration of their first high school year. Their purpose is to create connections and relationships supporting Year 9s transitioning to high school, and every week they upskill in a workshop they will then facilitate with the younger students the following week. They play a vital role in the success of the programme.
Here’s what the mentors shared with us…

What attracted you to become a Stars mentor?

The opportunity to ‘give back’ and help Year 9s was a common theme motivating the mentors. Rochelle spoke about knowing “how it felt coming into Year 9 and how stressful it was,” while Keira and Elisa both talked about siblings being a consideration.

Keira shared: “My sister is coming to High School next year and I really hope that someone will do the same for her. Because I know she’s really nervous about it and worried about it, and I think it’s a really great idea to help show them there’s nothing to be scared of and bridge the gap between the seniors and the juniors.”

Elise said: “I thought it would be a really good way to give back and help my little sister and help her friends and anyone who feels very alone, someone who doesn’t have an older sibling in this school. I felt like that was something I’d like to take on.”

What have you enjoyed most about Stars so far?

Our mentors spoke of the reward coming from seeing Year 9s grow in confidence through the year, showing them their efforts are working, as well as the opportunity to interact and form friendships with younger students.

Elise said: “I feel that stuff that I enjoy about Stars comes from the reward – helping other people makes me feel really good.” She went on to say “It touched me one of my Year 9 peer mentoring girls came up to me after the lesson and followed up on some of the advice that I’d given. To me that was an indication of someone really listening, genuinely interested and taking on board the things I had to say… grounding the purpose and making me feel like I’m doing a good job in my role.”

Recalling a similar story, Rochelle shared: “The sweetest moment. One kid was a bit quieter than the rest so it was hard to get him to open up. And one time in the hallway he was like ‘Hey Rochelle’ and we stopped and we had a good conversation. And he said he wanted to say thank you because you helped me open up. It was the sweetest moment, I didn’t expect it and I was like ‘oh my goodness thank you.’ It was really heart-touching I’d say.”

In what ways has Stars helped you develop your own leadership and other life skills?

The mentors highlighted a range of important skills they have developed as part of their time in the programme that they will carry forward with them.

Elise said: “Someone told me that being a Stars peer mentor is really good for leadership in Year 13. Initially I thought that meant it looks good on paper – people would look favourably at it. But when I’m listing the skills in my [leadership] application that I have, I reflect and I see a lot of the skills that I have learned from Stars peer mentoring ingrained in how I am going to become a leader in the future. So learning how to influence a group, persuade a group, communicate and engage a group – especially of a group I do not usually communicate with (year 9s) – their teachers, my coordinator, my fellow peer mentors, it’s a really good way to learn how to communicate, coordinate, organise a whole group of very different people.”

Connor said: “Being able to know how to organise a group of people and different types of people as well because younger kids are kind of hard to control. As well as work with other peer mentors to make sure it happens properly.”

Keira shared: “The training days have helped a lot. With the lessons, we’re teaching them but we have to know about them to teach them. So in the process of planning, we learn a lot as well.”

Rochelle said: “I learnt all these different skills that I’m definitely going to be using in the future to become a teacher.”

Finally, we asked them to reflect on how Stars helps Year 9 students. Here’s what they said…

Keira: “It helps to teach them things they wouldn’t necessarily learn within the school curriculum. So a lot of life skills and things that will take on – hopefully – outside of High School as well.”

Elise: “The whole idea of Stars is to support Year 9 students. Everyone thrives on support. Whether the Year 9s acknowledge it or not (because often they won’t), we all know that it’s helped them.”

Connor: “It gives them the confidence to be around older kids at school and they realise it’s not so scary to be around the seniors, and they’ll have older kids if they need help with something.”

So, would they recommend Stars mentoring to others?

Their answer was a unanimous “Do it!”.