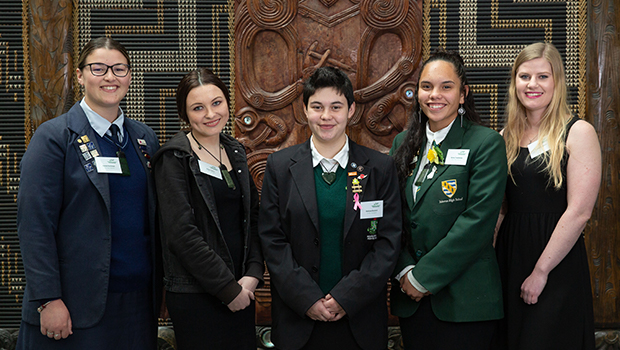 Five of Waikato’s most inspiring Kiwis were recognised for their outstanding leadership and becoming role models for other young people, at the Graeme Dingle Foundation 2019 Excellence Awards.

Renee Hurliman and Reina Treadaway, Melissa Blackett and Paige Auton and Emma Haddock flew the Waikato flag in various categories at the awards ceremony in Auckland last week Renee and Reina received the Stars – Outstanding Contribution from a Peer Mentor Award. Sponsored by THL, the award is for mentors who have demonstrated leadership and a positive role model within their school.

Career Navigator is the last step before students leave school, and embark on their career.

The award recognises that Melissa and Paige have adopted a positive attitude and work ethic, actively pursuing career opportunities and connecting with future employers while gaining skills and confidence to make subject and career choices.

Emma was awarded the Outstanding Contribution Award, recognising her outstanding contribution within the wider Graeme Dingle Foundation community to progress the Foundation‘s aims.

The five Waikato winners received their awards on an evening which celebrated the over 27,000 students, their mentors, leaders and volunteers across the country who have been involved in the Foundation‘s various youth development programmes including Kiwi Can, Stars, Career Navigator, Project K, Kiwi Tahi and MYND – over the previous 12 months.