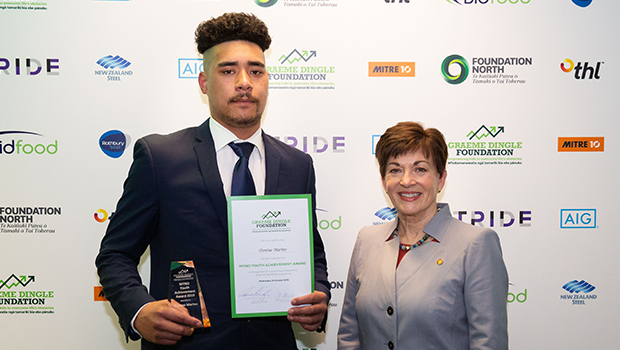 Life was tough for Dontae Marino. But now he has been handed an award by Governor General Dame Patsy Reddy and is a role model for youngsters.

Dontae says he saw a lot of violence and was exposed to a lot of drugs and alcohol growing up.

He moved between different family members and never really had anywhere “stable” to live.

He dropped out of the education system at 12 years old and got involved with the wrong crowd, which led to doing crime.

But he has now been presented the MYND Youth Achievement Award.

MYND is a programme run by the Graeme Dingle Foundation. It is a community-based programme that works with serious male offenders 14 to 17 years who have come to the notice of police and Oranga Tamariki (the Ministry for Children) through offending and anti-social behaviour.

The aim of the programme is to create attitudinal and behavioural change to reduce the severity and frequency of offending.

The programme is highly intensive using specially trained personnel to tackle the complex needs of those referred through the Youth Court process.

Dontae was with MYND for more than eight months and made a lot of positive changes.

He finished MYND in May 2018 and continues to move forward with a focus on the future.

He was just one of several Aucklanders honoured by the Dingle foundation.

Kiwi Can is a life skills and values program for primary schools that promotes a “can-do” attitude and encourages children to take responsibility for their actions.

Youth charity The Graeme Dingle Foundation holds the awards to celebrate the 27,000 students, mentors, leader and volunteers across the country who have been involved in a variety of programs.

“The Awards are an amazing opportunity to celebrate this country’s future – our children and our young people. It provides a valuable platform for them to recognise their own strengths and muster, from within, the conviction to overcome challenges, both big and small,” says foundation co-founder Sir Graeme Dingle.

The foundation also runs the Stars program for secondary schools to develop self-confidence, leadership and life skills, by senior students becoming peer mentors to help the transition into high school.

The Stars Outstanding Contribution from a Peer Mentor Award was won by students Joshua Manning and Lara Craigie.

“She has built positive relationships with her peer mentor class and is able to deal with demanding students.

“Josh is one of the most respectful, outgoing, kind and cool people I’ve met.

“He engages with the class and discusses other things such as our character values and how we should treat one another and people in general,” he says.

Keanu Pene, Matthew McCarthy and Mollie Evans won the Project K – Excellence Award, for achievements in the program for year 10 students to build self-confidence and promote health and education skills.

“Mollie developed a high level of resilience, not giving up when meeting conflict – rather using it as an opportunity to grow and move forward,” says Project K programme co-ordinator Alyssa Carr.

The Kiwi Tahi Award was given to Taati Tahana, for his progress in the prevention program he joined three years ago. Kiwi Tahi is a service targeted at 8-12-year-olds considered to be vulnerable due to negative influences and risk factors, which aims to prevent escalation into social services by bringing life-skills to strengthen identity, school engagement and interpersonal skills.

“It gives me a tremendous sense of joy to be able to recognise and acknowledge each and every one of our winners, who we are all so exceptionally proud of,” says Dingle.

“The Awards are an amazing opportunity to celebrate this country’s future, our children and our young people.”