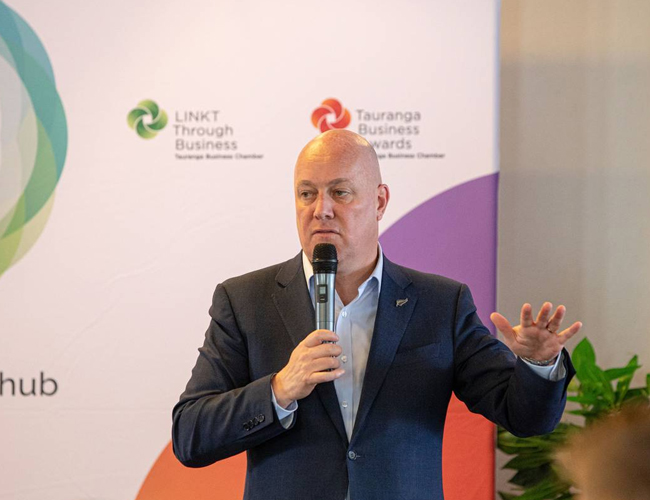 The Government “is not backing” victims of ram raids and aggravated burglaries or being tough enough on serious repeat offenders, says National’s leader Christopher Luxon.

The comments were made during a visit to Tauranga on Monday and after Auckland dairy worker Janak Patel was fatally stabbed last week.

Luxon said he had been in politics for nearly two years – almost one of those years as leader of National. While he remained “incredibly optimistic” about New Zealand’s future during this time, he also felt “we are so completely going in the wrong direction”.

He said, in his view, the country’s potential was not being realised socially, culturally, economically and environmentally.

Some of the issues he discussed included the cost of living crisis, poor health and education outcomes, rising crime rates and centralisation of services.

He felt economic mismanagement in Government was a contributing factor to these issues, saying “you need a strong foundation of economic management and competency, so you can forge the world-class public service we want to be able to offer New Zealand people”.

He said 20 per cent of Kiwis were now waiting more than six hours on average at hospital emergency departments and thousands were waiting more than four months for their first appointment to access specialist treatment.

Luxon also said attendance records were the worst “we have ever had” and academic achievement was “rapidly declining”.

“Every metric has got worse,” he said.

“Sixty per cent of New Zealand kids are not going to school regularly; 100,000 kids are chronically absent from school … 90 per cent of ram raiders are kids that are completely disengaged from school.

“We have a 25 per cent reduction in prisoners in prison. That would be lovely if crime wasn’t going up, but serious crime is up over 20 per cent.”

Earlier yesterday, Luxon, Uffindell and Muller went to Pāpāmoa Primary School to sit on a session with the Graeme Dingle Foundation – the students focusing on learning values such as respect and gratitude, Luxon said.

At a media stand-up after the luncheon, Luxon said he had visited the Rose Cottage Superette in Sandringham to pay respects to Patel and also attended a vigil in Hamilton yesterday.

“I hope the Prime Minister and Cabinet are waking up and getting their head in the game and are actually going to come out with some real concrete proposals that address both those concerns of victims and dealing with serious offenders.”

He said there was “immense frustration” among victims of ram raids and aggravated burglaries because “the Government is not backing them” or being tough enough on serious repeat offenders.

Luxon said he had met with fearful dairy owners across New Zealand, and spoke of one Hamilton retailer he met yesterday who had been ram raided five times over five days by the same offenders.

“What the Government doesn’t understand is that these are New Zealanders that have worked incredibly hard. They have often had two to three jobs to get a deposit together for that business. They then work incredibly hard in that business to do everything that we ask them to do.”

“They try and give their kids opportunities they didn’t get to have, they have come to New Zealand often leaving everything behind with hope of a new future. It’s all destroyed when a ram raid or a senseless act of violent crime like that occurs.”

He felt that Government did not understand the stress put on shop owners, saying it was “too stuck in the bubble of Wellington and needs to get out and go meet with the victims of ram raids”.

National’s recently released youth crime policy proposed creating military academies for 15- to 17-year-olds who were the most prolific re-offenders, an idea that had been widely criticised for having a lack of evidence.

Luxon referenced the policy when asked what his Government would do, claiming the academies would act as a “powerful circuit breaker” that would turn offenders’ lives around.

It comes as the Government has announced a multi-million dollar package to tackle retail crime and reoffending. The package included a new $4m fund to support councils in Auckland, Hamilton, and the Bay of Plenty with crime prevention programmes, a new fog cannon subsidy scheme, and an extension to the $6m Retail Crime Prevention fund to include aggravated robberies.