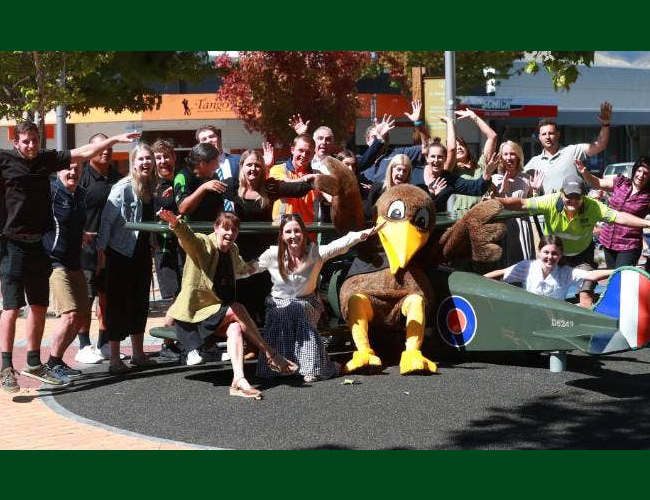 The race is on to find a further 80 more daredevils who are willing and able to throw themselves out of a plane in the name of charity.

A brainchild of the Graeme Dingle Foundation Marlborough, the mass skydive has been dubbed the ”Drop for Youth” initiative and is one of the foundation’s flagship fundraising events.

Around 20 adrenalin-seekers who had already signed up for the jump over Motueka in May turned out at Blenheim’s Liz Davidson Park on Tuesday lunchtime for an impromptu photo shoot to highlight the fundraiser’s launch.

Among those keen on taking the plunge from 9,000 feet (2700 metres) were father and daughter team John and Lily Pontague, aged 13.

Pontague said he was spurred on to take up the challenge by his daughter who was “very excited to be jumping out of a plane.”

Pontague said his daughter has successfully completed the foundation’s Kiwi Can and Stars programmes, and they wanted to give something back to the community while challenging others to do the same.

“We’re hoping to raise three to four grand. It’s a great way of raising money for Marlborough youth. If any other father and daughter or father and son want to challenge us, it will be great fun,” Pontague said.

The foundation’s Marlborough general manager Kelvin Watt said previous fundraising projects had to be canned due to Covid-19 restrictions.

“I don’t need to elaborate on how tough and frustrating it’s been for us as a charity with organising and then cancelling fundraising events in recent years. So, we thought, let’s focus on what we can control… and that’s encouraging people to fundraise and leap from a plane,” Watt said.

“We’ve had other fundraisers cancelled, but we can still skydive during Covid times, and it’s a great way of getting lots of people together.

“We need to raise close to $1 million this year to continue delivering our programmes. In October, we usually hold a black-tie event called “Dazzle” that usually raises around $100,000, but we haven’t been able to continue with it for the past two years. Last year we had it all planned, all the tickets sold, but then we had to can it at the last minute,” Watt said.

Watt said he was aiming for 100 parachutists to jump.