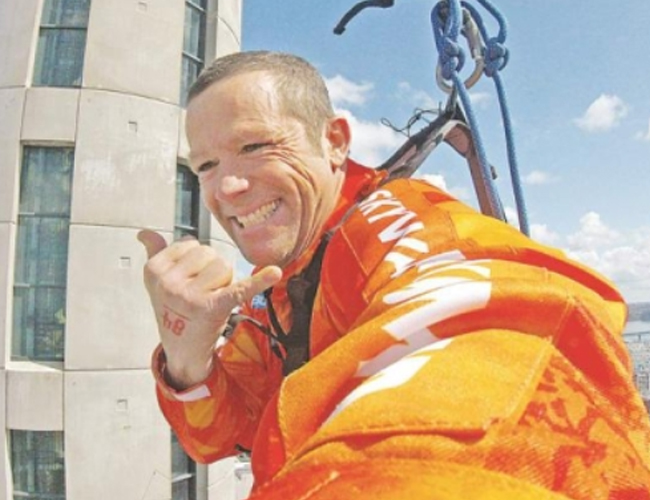 Stan was one of about 40 jumpers who took part in the Drop Your Boss fundraiser run by Mitre 10 in partnership with the Graeme Dingle Foundation Excellence Awards.

“I think the worst part was just standing on the edge looking over,” Stan said. “That first second was pretty exhilarating, for sure.

After his descent from the 192-metre tower, Mr Scott nominated All Black Aaron Smith to take up the challenge next year.

All money raised goes towards the work of the Graeme Dingle Foundation, which supports young Kiwis from the ages of five to 25 to build resilience, mental fitness and life skills.

“It’s all for an amazing cause. They’ve raised about $75,000 from the people who are jumping today, which is amazing,” Mr Scott said.

“This organisation certainly touches a lot of people, about 25,000 every year.

“The good thing about it is they encourage people to do things within the community, so they are giving life skills to kids and then those kids give back to the community.

“It doesn’t get much better than that.”