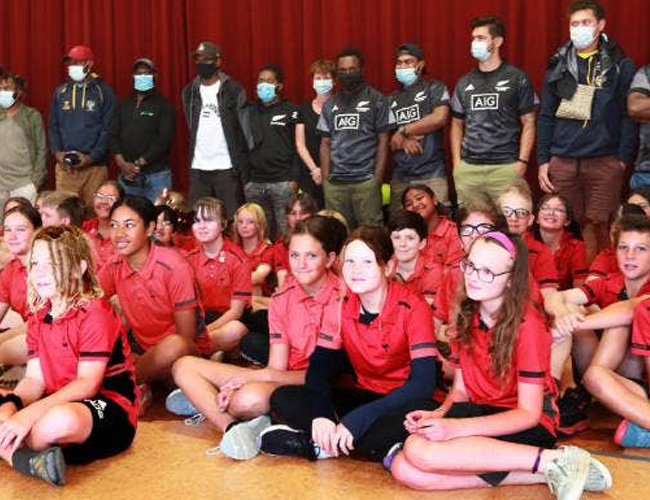 Christmas has come early for a group of Marlborough seasonal workers missing their families, thanks to a bright idea from Redwoodtown School pupils.

About 400 seasonal workers, in the country on the Recognised Seasonal Employer (RSE) scheme, have received an All Blacks shirt each from the pupils as a Christmas gift.

The pupils chose the workers as unsung community stars, as part of a community project run by the Graeme Dingle Foundation’s Kiwi Can programme, in which pupils seek to give back to the community in some way.

Easter Petaia, 13, welcomed a group of about 22 RSE workers from Hortus into the Redwoodtown School hall on Tuesday, saying on behalf of her Year 7 and 8 classmates that they wanted to thank the workers for all their hard work in Marlborough.

The workers were from Vanuatu, the Solomon Islands, Papua New Guinea and Fiji, and the pupils understood many of them were not able to get home to their families since before the borders closed early last year.

While keeping the vineyards and regional economy going during the challenging pandemic, the pupils felt the workers had sacrificed a lot for the good of the region, and they wanted to recognise their hard work with a thank-you gift.

After waiata, the pupils and the workers mixed into a circle, and played one of the pupils’ favourite energiser games, called Shebang, which the workers picked up very quickly, and there were giggles all round.

Then Lusia Anderson, 13, led the presentation of shirts, from pupil to worker.

On behalf of the workers, Francis Pulo thanked the pupils for recognising their hard work and sacrifices.