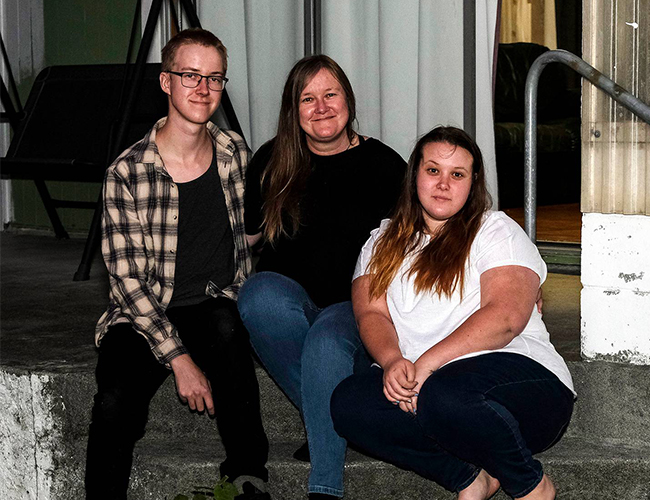 Image: Debbie Griffiths with her children Caleb and Hannah who signed up for Career Navigators. Photo / Anthony Phelps

Young New Zealanders who signed up for community programmes during the Covid-19 pandemic had worryingly similar stories.

They had already hit barriers in their life. Some had been bullied, others had body issues, or had moved cities and schools and did not fit in. As a result, many of them had started to withdraw from the world.

Then Covid-19 arrived, and some of them withdrew further, sometimes for months on end, with only virtual relationships and schooling.

New research says they were exhibiting “silent disengagement” – the withdrawal from peers, schooling and community with little outside recognition.

Disengagement often flies under the radar because it is not in itself a mental illness or “at-risk” behaviour and does not always raise flags with social services or the justice system. But it can have long-term, even lifelong, consequences.

“The young people that I talked to and the parents… were telling me the same stories over and over again,” said Julie Moore, research and evaluation manager at the Graeme Dingle Foundation.

“It’s been clear that there is definitely this social issue out there that was silent and that parents and young people were struggling with this and there wasn’t any help for them.”

Work is now being done to find the best ways to re-engage kids who have retreated to their bedrooms during the pandemic.

In 2020, the Graeme Dingle Foundation, which focuses on child development, expanded two of its school-based programmes into the wider community in response to some of the negative impacts of Covid-19.

Project K was targeted at 14- and 15-year-olds who were struggling or not fitting in at school, and Career Navigator aimed to help 16- to 24-year-olds with the transition to work.

An evaluation of these programmes this year, released to the Herald, identified similar traits within the cohorts.

“The findings revealed a group of young people disengaging from their peers, education, and society with little recognition,” the report said.

“Many … were still in school but taking to their rooms and socialising online – leaving their parents and caregivers feeling isolated, struggling to re-engage them.”

Social withdrawal among young people was already being observed in New Zealand and overseas before Covid-19, but appeared to be worsened by long periods of isolation during the pandemic.

“We found that young people started out really motivated to keep their learning up,” said Moore. “But that would gradually drop and they’d become less motivated as time went on because of the isolation.

“Parents were struggling to get these young people out there and reconnect, do all the things that they remember doing.

“They wanted to be out socialising, and now they’ve got these messages saying ‘Isolate, don’t talk to people, keep yourself separate’. So of course it enables and strengthens this behaviour.”

Covid also made young people in the programmes anxious – about their family’s income, about poverty, and their health.

“It seems like the world out there is a place where anxiety is very real. So that compounds their anxiety for them,” Moore said.

Social media played a role too. While it could be a haven for young people, especially minorities, to speak to like-minded people, it could also give the illusion of socialising and increase their disconnection from their peers or community.

Social media platforms also made it easy for people to compare themselves to their peers, and worsen any feelings of inadequacy or not fitting in.

Rachel Rodger set up the Career Navigator programme in Marlborough, which was previously targeted at school leavers but was expanded to people a few years out of school.

She had planned to teach the kids, mostly teenagers, how to write a CV or nail a job interview.

“But that was way, way down the track for many of them,” she said.

“They needed to be able to just walk through a door without knowing who is on the other side of it. That was enough to tip a lot of them over the edge.”

Rodger said the programme had to be broadened to include basic advice like getting enough sleep, eating properly, and general wellbeing.

“Basic stuff,” she said. “It was really taking a step back and going ‘We really need to give these young people some help’.”

The foundation’s Project K programme is based in Auckland and involves a three-week retreat on Great Barrier Island run by facilitators, followed by individual mentoring when they return to their lives.

The programmes had shown signs of success. Moore said out of four cohorts she tracked, 87 per cent of those who attended Career Navigator were in work or further study.

‘I want them to be engaged’

Caleb and Hannah Griffiths, from Blenheim, were among those who signed up for Career Navigator. Both of their lives had been upended when Covid-19 arrived in New Zealand.

Caleb, 23, lost his job working on live events, which he had done on a casual basis for four years.

“It sucked when I wasn’t able to work there anymore, and was disappointed that I had to find somewhere else,” he said. “I didn’t really know where to head.”

He was on the Jobseekers benefit and suddenly competing with dozens of other young people for jobs which didn’t exist.

“That did have an impact on his mental health,” his mother Debbie said. “He didn’t know what to do, he didn’t know where to start with getting a job.”

Hannah, 20, had fallen in love with the idea of working in the tourism industry in Marlborough. That dream also evaporated overnight when New Zealand’s borders closed.

“It definitely wasn’t easy mental health-wise,” she said. “The unknown sometimes makes me a bit anxious. Even today, I still have a little bit of anxiety with Covid and if it’s ever going to end.”

“Both of them just stayed home. They spent a lot of time on the computer. They weren’t going out with their friends.

They enrolled, reluctantly at the time, in Career Navigator. And they have since found their feet.

“It was the best thing they could have done,” Debbie said. “It got them out of the house for a start. It gave them CV skills, interview skills, and really good motivation.”

Hannah has since found a job in a winery lab, where she has worked for two harvests.

Caleb has found work at a metals factory, and hopes to find a job in a police communications office.

He said: “It helped me focus on where I wanted to go and how to achieve that. My goals are clear where I want to go now.”

WHERE TO GET HELP

If it is an emergency and you or someone else is at risk, call 111.

For counselling and support

For children and young people

For help with specific issues

All services are free and available 24/7 unless otherwise specified.

Share the post "Great Minds: A group of young New Zealanders were already disengaging from public life – then Covid-19 arrived"