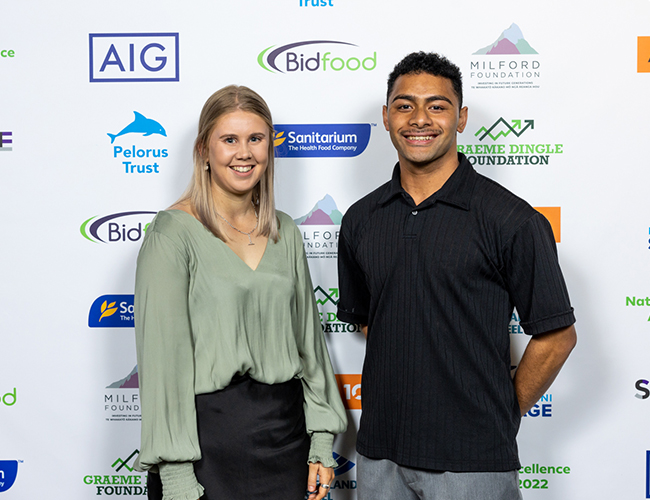 Redwoodtown School has been recognised for their work in the community by the Graeme Dingle Foundation.

Dignitaries, business leaders, families, and students from across the country met in Auckland on Monday night to celebrate the achievements of students at the Graeme Dingle Foundation’s 22nd Annual Excellence Awards.

The event, hosted by the Graeme Dingle Foundation, is known for celebrating the next generation of successful young Kiwis. Redwoodtown School’s community project recognised 400 Recognised Seasonal Employer (RSE) workers who received an All Blacks shirt each from the pupils as a Christmas gift.

Kiwi Can Leaders Fili and Leakin said the pupils chose the workers as unsung community stars, as part of a community project run by the Graeme Dingle Foundation’s Kiwi Can programme.

“While keeping the vineyards and regional economy going during the challenging pandemic, the pupils felt the workers had sacrificed a lot for the good of the region, and they wanted to recognise their hard work with a thank-you gift.” “The workers were from Vanuatu, the Solomon Islands, Papua New Guinea and Fiji, and the pupils understood many of them were not able to get home to their families since before the borders closed early last year.”

Easter Petaia, 13, said her class from Redwoodtown school wanted to thank the workers for all their hard work in Marlborough. Jules Lloyd-Jones, Chief Marketing Officer of Mitre 10 says it’s important to recognise young people contributing to their communities, especially those who have faced challenging circumstances brought upon their own communities during the pandemic.

“Community projects run by the Foundation encourage young people to plan a project that gives back, and to give is a simple way to improve wellbeing. Like our Mitre 10 Helping Hands projects, the community projects the students are involved in exemplify manaakitanga (respect, generosity and care) and lift their spirits and those of their communities. We’re very proud to support this excellent award.”

Marlborough’s Brad Jacob took away the award for Career Navigator Outstanding Achievement of a Participant, celebrating his successes from his time in the Foundation’s Career Navigator programme.