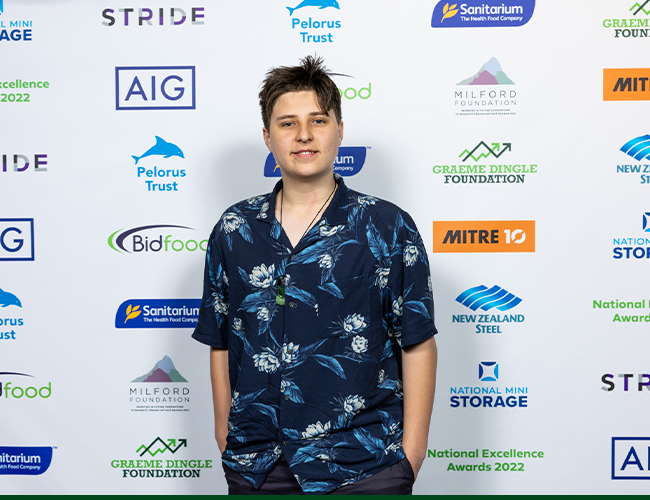 Image: One tree Hill College student Kaden Solley has been recognised for his achievements by the Graeme Dingle Foundation

One Tree Hill College student Kaden Solley has been recognised for his achievements by the Graeme Dingle Foundation and says he has found a new path for his future.

The Graeme Dingle Foundation held its 22nd Annual Excellence Awards which are sought after by thousands of hardworking rangatahi across the country – there are just nine award categories. A special award is the Project K Excellence Award.

Project K is Graeme Dingle Foundation’s flagship youth programme targeting 14 year olds at an instrumental time in their lives. The programme builds selfconfidence, life skills and a healthy lifestyle through an array of outdoor activities, challenges, interaction with other young people and a positive relationship with a mentor.

The Project K Excellence Award celebrates students who have demonstrated huge progress in their self-confidence, initiative, positive thinking, and achievement of goals and acted as a role model in the local community. This year’s winner was Solly.

“Project K has introduced me to so many amazing experiences, like abseiling, tramping, biking, and hiking through the wilderness. This led me to discover that I actually love the outdoors,” he says. “As a result, I have since joined another programme called YSAR, which is Youth Search and Rescue. I am learning more about the bush and how to survive and navigate it.”

Solley says he now has an exciting plan for his future.

“I feel that Project K has given me a sense of direction. After I finish school, I want to join the New Zealand Defence Force where I continue to work in a team and have adventures outdoors. I thank Project K for opening these doors for me.”

Graeme Dingle Foundation CEO, Jenny Stiles, said the National Student Excellence Awards is an opportunity to bring high achievers from the Foundations Network together with a warm eelebration of their individual journeys.

“It is the most incredible feeling to see all award winners standing proudly on the stage, especially this year and it is the first time we have been able to hold the awards face to face since 2019 – is just so exciting,” she says.

“It’s been a tough time for young people and their families, so this year’s awards event is more important than ever. The numbers of tamariki and rangatahi disengaging from school, feeling highly anxious and suffering other mental well-being challenges has increased.

“But there is always a path forward and we, as a community and foundation, want young people to know that we are here to help them and to nurture their talents and to help them succeed. To be recognised as a winner in front of dignitaries, family and mentors and to have the courage to speak about their achievements is huge and incredibly inspiring.”

Solley recognised the incredible support networks who have and continue to carry him on his journey.

“Winning this award gives me a great sense of accomplishment in my Project K efforts and experiences. I’ll never forget it or the people who have helped me.”