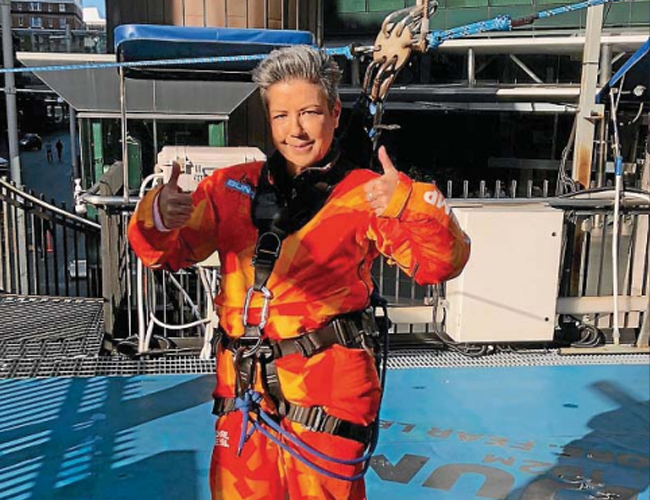 Former deputy opposition leader and Westie MP Paula Bennet jumped from the Sky Tower in a fundraising effort for kids.

The annual Graeme Dingle Foundations’ Drop Your Boss event sees celebrity names and the ‘‘big bosses’’ from national corporations take one for the team, fundraising for children before overcoming their fears and completing a sky jump. This year, 40 participants from the charity’s business partnerships and a few familiar Kiwi faces, banded together to take the plunge.

Bennet raised over $8000 and Mitre 10’s ‘‘Stan the builder’’ raised over $3500 and was keen to touch down saying: ‘‘To raise money for one of the best causes there is in our country, I think 3 seconds of terror is worth it, so I highly encourage anyone who is thinking about doing this, to just do it.’’

Art and Matilda Green, known for their television romance on The Bachelor, said: ‘‘We were a tiny bit nervous, but it was all worth it. The Graeme Dingle Foundation do so much amazing work helping all our kids across the country, and we are honoured to help out in a small way.’’

Participants have been hard at work dedicating their time to fundraising toward a goal of $60,000 for the cause, which supports the mental fitness and development of young people across Aotearoa New Zealand.

As at the final ‘‘drop’’ of the day Drop Your Boss participants had raised over $75,000 collectively, an outstanding result, says Graeme Dingle Foundation’s business development manager Stephanie Brown.

‘‘Seeing our partners come back for another year of fundraising has been brilliant. Everyone has had their own tough time over the past couple of years, so to see our communities’ band together once again and fundraise to support children across the country has been so heart-warming.

‘‘In the past two years we’ve seen a new level of student disengagement and anxiety, so now more than ever it’s important that people get behind our cause and event. Our loyal participants who left their comfort zone today are acting as role models, showing young Kiwis that it is possible to overcome your fears and the challenges life may present you’’ says Brown

Graeme Dingle Foundation’s cause is a worthwhile investment for donors as every dollar donated to the Foundation sees a return of $7.80 to New Zealand’s economy based on the likely positive trajectory of a young person who has been involved in the charity’s
programmes.

The public are invited to contribute to the fundraising efforts of fearless sky-jumpers by visiting Givealittle and searching ‘‘Drop Your Boss 2022’’ which will be open for donations until the end of September.

‘‘Seeing our partners come back for another year of fundraising has been brilliant.’’ Stephanie Brown Graeme Dingle Foundation’s business development manager