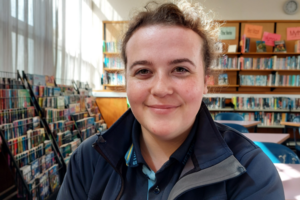 I was insecure, anxious and unsure what I wanted to do at the end of school. I wore noise-cancelling headphones to manage feeling overwhelmed by people around me and spent a large part of my school time at the Health and Wellbeing building, rather than in class. I had a terrible last year and I only passed by two credits.

Then I joined Career Navigator at the beginning of Year 13. At the start of the programme, I was real nervous, I was struggling with depression and anxiety and it was getting in the way of life in general.

My biggest challenge was getting the courage to actually speak. That was a really hard thing for me. I started this year really nervous, and I wouldn’t say a lot, I wouldn’t participate in class discussions. Doing Career Navigator, I don’t know what happened . . . but something just changed halfway through the programme.

I even had the courage to secure a part-time job. I do a lot more things that I probably wouldn’t have done before the programme. I actually talk to my managers now but before I would have been too nervous.  I go to them when I have a problem or like something needs to be done. It’s helped me gain confidence which is really good.

The mentors were great. They had some good ideas and they listened to everyone else’s ideas too. They were so friendly, they always said hi and I felt like they encouraged me to join in the conversation.

I would definitely recommend this programme to others – and I’ve been speaking in front of Year 11 and 12 form rooms to tell them all about it.

Next year, I’ve decided to go to the University of Waikato and doing a double major – something I never would have thought would happen at the start of the year. And some of my Career Navigator group are even helping me move!