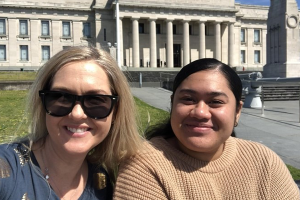 It often takes an incredible amount of bravery and courage to step into the unknown. For some of our Project K students, their self-efficacy and resiliency is so low that when offered a life changing opportunity, the prospect is so daunting they are overwhelmed and decline. This was the case for young Kai. Kai was so low in confidence when we met them they said ‘no’ when offered a position. After talking to a graduated Project K student from Waitakere College, Kai reluctantly accepted.

Mentoring through Level 4 lockdown during COVID-19 was a difficult start to their Project K experience. Amongst their shyness, matching happened on Zoom, which for a young person lacking confidence, meeting new adults online was scarier than in person. Kai was committed to the process and matched with a mentor who in many ways was the opposite to them. Kai’s mentor was from a top Law firm, confident in herself, talkative and open. Over the process of online matching, games nights and group sessions, Kai grew to trust and open up to their mentor. At times, there was difficulty in trying to encourage Kai to see their potential as they had not yet done Wilderness. However, their mentor was intentional in creating opportunities that pushed Kai.

While mentoring starting before Wilderness was difficult, it also provided the opportunity for Kai and their mentor to work together setting goals to get the most out of the opportunity and prepare for Wilderness together.
Induction arrived which involves meeting 11 other young people and hearing about what they will be doing on their Wilderness adventure, Kai was so terrified they sat in their car crying refusing to leave. Eventually
Kai joined the group in the van and headed for induction. However, they were still so scared they refused to take off their hoodie – this acted as their only protection. Over the process of a few hours, instructors and some fellow students got alongside Kai to encourage them, they settled into the group and became open to the opportunity of the challenge knowing they were supported.

After completing 13 days in the Wilderness and doing tasks they never thought possible, Kai injured their knee hiking with the only safe way to look after them and the group was to airlift them out. Kai feared heights, had never been in an airplane before, nor been to hospital. In an instant they were forced to face these fears as they were lifted out in a basket and pulleyed into the helicopter being transported alone with strangers. Through Kai’s injury it was expected the family would be upset and want them pulled out instantly. However, the opposite occurred and instead the family responded with calm and gratitude of looking after them – and even wanted them to complete the journey.

In hospital Kai sat in their bed with a giant smile and the affirmation cards from their mentor – the biggest source of encouragement through their journey. Not long after arriving at hospital they asked if Kai would be able to return to the Wilderness and complete their journey – a vast difference from Kai who previously sat in their car crying refusing to remove their hoodie. After medical clearance and a night’s rest at home, they returned to the
group to complete the journey. Kai continues to grow and push themselves.

Wilderness acted as an anchor for them as they discovered their strength and confidence. Kai returned confident delivering a speech at ‘Welcome Back’ that encouraged their mother to also give a speech on behalf of families. Kai is committed to the relationship with their mentor, flourishing and building a genuine connection. Kai’s mentor is gentle  and caring, yet constantly pushes Kai to better themselves.

In a recent goal setting event, Kai was terrified to do rock climbing. Kai still feared heights, that the harness would not hold them and that the belay system would fail. Initially Kai said no, however over the course of an hour, Kai and their mentor took baby steps to become confident and attempt the climb. They first tried on the harness, then slowly felt how strong the belay system was, slowly stepped up to the wall to try a few holds. Eventually Kai attempted a climb – and failed. However, they stopped, looked at the wall tried again. And failed. Kai tried again for a third attempt and succeeded. Amongst this entire climbing process, Kai’s mentor stood there in tears of pride that a once scared young Kai no longer feared obstacles