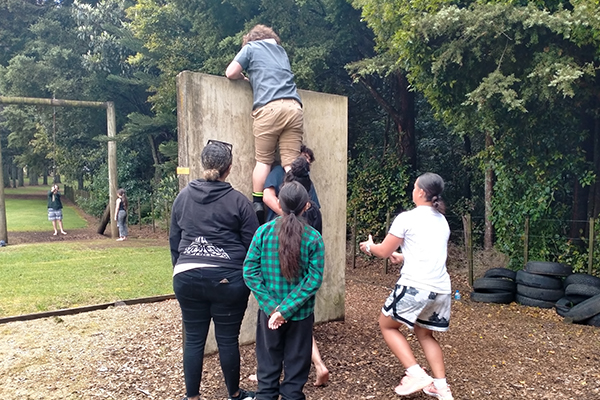 As time went by, sporadic glimmers of leadership shone through, but these were few and far between and he started turning up late to sessions. He was close to a breakthrough, if he just stuck it out, he would obtain what he was looking for.

Conversations were had about his leadership and what he wanted from the programme. Assuring James he would get what he was looking for, but in not turning up meant it would be harder to acquire. James not only started turning up, he started to flourish. Not only in the Career Navigator Ngā Ara Whetū sessions, but overall in his schooling career.

His relationships with his teachers, mentors and peers improved drastically. He became more confident and outspoken about how he felt. James started putting his hand up to lead sessions, lead karakia and engage with teina students. This in turn has seen teina students look at him differently and are more excited to engage with James.

With the help of mentors, teachers, and the support of his peers, he has put himself out there, and although he has struggled at times, he has developed a resilience which can be hard to come by. James has overcome his shyness and allowed himself to be more comfortable leading others, including his peers.
He has stepped up to challenges willingly and helped support those who are less confident too. All of this has shown a different side to James, a more confident side with a wicked sense of humour.

James has also thrived in embracing the careers component of the programme thanks to the support of mentors. He has made connections with local business people, and the programme has helped him to figure out what direction he wants to take. These mentors have supported him in looking at videography and digital media, providing resources to help James build his skills. This experience has also allowed James to build on his interactions with adults and potential employers.

James’ journey has been one of change and evolution all of which wouldn’t be possible without the Graeme Dingle Foundation Career Navigator Ngā Ara Whetū programme.

The Graeme Dingle Foundation are looking for people who want to support New Zealand’s youth by mentoring a young person. Help rangatahi like James by becoming a youth mentor today!